This review was originally posted on rateyourmusic. on their community forums. This version of the review has had some editing and corrections. 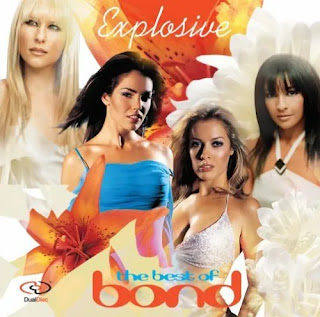 "I have seen blooms and blossoms, now I go.
To view the last and loviest, the snow.
(A frozen dream, a heart undone.)*
Forever burning, under the WinterSun."
*lyrics not audible for this line.

Explosive: The Best of Bond – This quartet of beauties have loads of musical talent as well as good looks. I am not sure of the band member’s ethnic backgrounds but many of their songs have a quick Latin Salsa and or Tango beat to them. They blend classical standards with an electric synthopop salsa blended sound that is reminiscent of a late 1970s action movie soundtrack. Track number two the title track “Explosive” could pass as the opening theme to a James Bond movie.

I first heard about Bond in an interview/preview from one of those entertainment tabloid television shows like “Entertainment Tonight” several years ago that introduced the group and perhaps plugged their album at the time (perhaps it was their debut album). I filed the group away as one to look out for. Unfortunately for a few years I only remembered they were a female quartet that jazzed up classical music. Eventually I saw or heard something from them again and eventually got this “dual disc” * [See Note at end of review]

As the group focuses on classical pieces and blend it with more modern musical techniques and styles this album is virtually instrumental. The few exceptions are “Viva!” which has a crowd, perhaps attending a soccer match shouting “Viva”, the catchy “Shine” which has some mariachi sounding voices (I’m not sure what they actually say if anything), and a short part of “Wintersun” (the lyrics of which I quoted at the beginning of this review) are the only songs that have lyrics. The track "Duel" also has vocal sounds but no lyrics.

The soccer match sounding “Viva!” starts out sounding like a Blue Man Group song it has a sort of PVC pipe instrument sound to it. “Wintersun” has parts that remind me of the popular 1970s Moog syntho-tune “Popcorn” by Hot Butter. The track “Duel” has some nice violin with some backing vocal sounds that are Enya-esk in its style. The traditional Christmas time classic “Dance of the Sugarplum Fairy” is even covered but simply titled as “Sugarplum”

Overall even though this album is reminiscent of a 1980s syntho-pop disco club soundtrack it is quite enjoyable. Casual listeners may recognize some of the standard pieces with that “I know that song but have no idea what It’s called” like those character actors you see in film after film but never know their name. When you see them you say, “Hey I saw that dude in the sequel to that Psycho Horror movie with that other dude”. The final track “Carmina” has that surreal eerie choir vocalizing that is used countless times in Demonic Haunting Horror Movies and trailers or epic fantasy movies with a huge battle on a mountainous plain. For years and years, I had heard that tune but never knew the title. I often forget the title, but now I tend to remember that it is on this album.

The DVD side of this Dual Disc only has 3 videos (Explosive, Fuego and Victory)

*NOTE: for CD/DVD combination discs like these Dual Discs (audio on one side video on the other) and packages that include both an audio disc and a video disc I do NOT review the DVD/Video portion here. Sometimes I review them on my personal blog, but rarely. I tend to forget about reviewing the DVD portion.