Album Review: 08 Aerosmith Will PUMP You UP

Album Review: 08
Aerosmith Will PUMP You UP!
This review was originally posted on rateyourmusic. It was one of the reviews I was assigned in the "Go Review That Album" game on their community forums. This version of the review has had some editing and corrections.
Aerosmith Pump
1989 Geffen Records 9 24254-2
**** 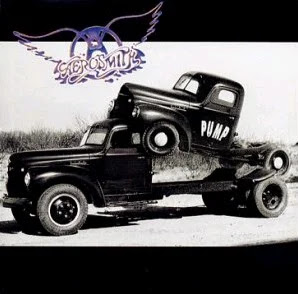 This is one of the best later Aerosmith albums. In a few years it can be called a classic, if it's not already. With hits like Love in An Elevator, Janie's Got A Gun and The Other Side how can it not be a classic? I think the tracks What It Takes, My Girl and Young Lust have had some major airplay as well. This is Aerosmith at their best. The only thing that stumps me is the Celtic style Dulcimer Stomp and the extra "hidden" country jig track at the end of What It Takes, they are good they just don't seem to fit with the rest of the regular stuff. Maybe it's a concept for the album that I just am not getting. OH and also on track number four Monkey On My Back the A-Boys use their Giving Dog A Bone base riff. This album is a good starting off point for new Aerosmith fans.

Pretty sure this was the first Aerosmith CD I ever purchased. Janie's Got A Gun is one of their Top 5 songs for me.